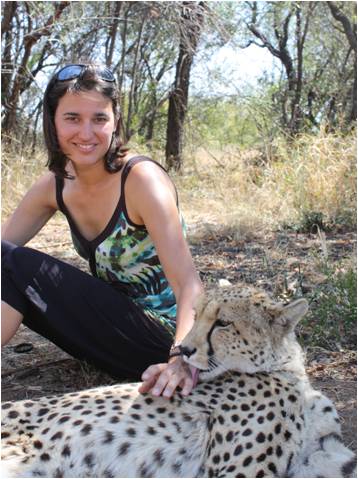 I completed my PhD degree at the University of Lyon (Lab “Biometry and Evolutionary Biology”, France), under the direction of Pr. Dominique Allainé and Pr. Jon Swenson from the Norwegian University of Life Sciences (UMB) in 2009. My work has focused on spatial ecology of European brown bear (Ursus arctos), from individual movements to population distribution in the context of multiple-use landscapes. My work had both theoretical (in movement ecology and space use) and applied components (in conservation ecology and management).

During my postdoctoral position at the university of the Witwatersrand, School of Animal, Plant and Environmental Sciences (APES), I have been working with Pr. Norman Owen-Smith on Spatial Ecology of large African herbivores. I focused on bottom-up and top-down influences on their fine-scale movements.

I currently have a postdoctoral position at the National Institute of Agronomic Research (INRA) in the Behaviour and Ecology of Wildlife unit. I work with Dr. Nicolas Morellet on Spatial Ecology of roe deer (Capreolus capreolus) in a multiple-use landscape. I develop dynamic connectivity maps at the population scale and investigate fine-scale response to environmental features and anthropogenic activities.

On a more applied point of view, habitat selection is an important field of conservation biology. With the constant increase of human impact on wildlife habitat (e.g. fragmentation of habitats, modification of habitat), conservationists and managers need to get insights into habitat requirements of wildlife in human disturbed landscapes. I am particularly interested in studying the impact of human on wildlife habitats and its consequences, and in developing approaches for spacially explicit habitat models for conservation purposes.

The objective of my current postdoctoral project is two-fold: (1) to develop dynamic habitat connectivity maps for roe deer in the Aurignac (France) population, that account for variation of environmental conditions and anthropogenic activities. The second objective (2) is to quantify variations of habitat selection behaviour at the individual scale and determine their causes. The results will led to a better understanding of habitat connectivity for roe deer, insights that will eventually be implemented to study the influence of roe deer on tick abundance in the landscape. My postdoctoral project lies within the broad context of identifying the determinants of population decline of less common herbivore species in the Kruger National Park, and in particular, the influence of resources and predation.

The more specific aim of the project is to investigate processes driving movement behaviour and space use by comparing 4 species of large African herbivores: common species (the wildebeest Connochaetes taurinus, the buffalo Syncerus caffer and the zebra Equus burchelli) and a declining species (the Sable antelope Hyppotragus niger). Both of these species are large grazers, but they differ in their herd sizes. While buffalo move in large herds numbering 100-500 individuals, wildebeest occur in much smaller herds typically numbering 15-30 animals, sable antelopes in herds of 10-20 individuals and zebra in herds numbering 6-10 individuals.

This contrast is expected to lead to fundamental differences in their movement rates, residence times in particular patches, and return times to previously exploited patches. Resource use by different herbivore species raises exciting questions on behavioural processes underlying habitat selection. Herbivores exploit different vegetation types with varying selectivity which vary according to species and may rely on the capacity to stay longer in high profitable place and/or come back more frequently on such places (Owen-Smith et al. 2015a and Owen-Smith et al. 2015b. The equilibrium between these 2 possibilities being imposed by relative productivity and regenerating capacities of these places and herd size influences. My postdoc project therefore aimed at comparing movements processes of different herbivore species (Martin et al. 2015; Martin et al. 2016 - In press - and Traill et al. 2016 - In press -) to identify behavioural decision rules involved, and to relate fine-scale movement processes to seasonal home-ranges.

In my thesis (pdf available here), I studied habitat selection and movement ecology of brown bear at different spatial scales and mainly in two European populations (Scandinavian and Pyreneean populations). These populations have very different conservation statuses and are distributed in contrasting landscapes, differentially impacted by anthropogenic pressure. The Scandinavian population is now expanding and reached more than 3000 individuals in 2009. The population is located in a heavily managed boreal forest, with important forest logging and associated road network. The Pyrenean population is still threaten to extinction with an estimated number of 20 individuals only, divided in three isolated groups.

The objectives of my thesis were, for the Scandinavian population, to assess the influence of habitat types and anthropogenic structures on bear habitat selection and movement at fine spatial and temporal scales (Martin et al. 2010 and Martin et al. 2013) to understand how expanding human infrastructures and activity influence bear behaviour, to be able to anticipate potential conflicts between humans and this large carnivores.

Concerning the Pyrenean population, the objective was to assess and quantify suitables habitats for bears at the population level to identify areas that should be protected or areas for potential new release of individuals. I therefore developped a new approach combining large- and fine-scale resolution spatially explicit habitat models for bears in Pyrenees (Martin et al. 2012).